"Tomorrow's World", sigh, now there was a science program. Thursday nights on BBC1, best TV night of the week...Tomorrow's World then Top of the Pops...TV bliss for a young Mark Morb.
Plenty has been written about this science program and watching a few clips from the 70's and early 80's on Youtube it definitely had a naive amateurish charm to it, far more endearing than the "Kids TV" slightly patronising style that current BBC science programs go for (I'm looking at you "Bang goes the theory!").
During the main years I watched the program (mid 70's to mid 80's) there were two theme tunes, the jazzy Johnny Dankworth composed original from 1966 and the synthy version by Martin Cook and Richard Denton from 1980.
This post is a new rip I've done of the Dankworth theme (credited to "The Brass Chorale") along with the B-Side, the theme from "The Late Show", which is also excellent. Taken from the original vinyl (I also own an original 7" Demo version but it's an identical recording) and ripped at high res (96/24) although the usual 320 MP3 version is available also (links in comments), let me know your thoughts.

I will post up the Cook/Denton version at some point over the next few weeks as well so keep an eye out for that. 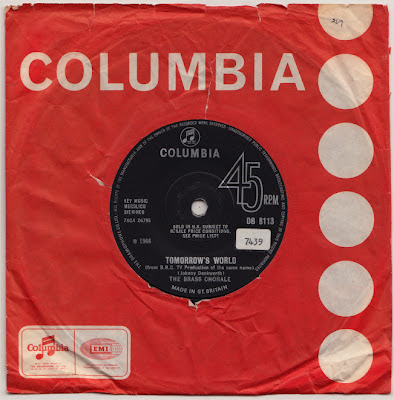 I used to live for these programs...I remember clearly the one episode when they stated that CDs were indestructable!

Hi there, just discovered your blog searching for 'Picture Box'

I've posted rips of all the BBC Denton and Cook vinyl on my blog if you're interested.

Great Blog Mr. Primate....shall have a good look around later this evening over a large glass of Red Wine..thanks for the comments.

How are you getting on with the rip?

All the best, mate.

Thanks for the nice comments "Anonymous". I have finally got round to ripping the Cook/Denton version (as well as lots more stuff). So expect to see it posted soon.....